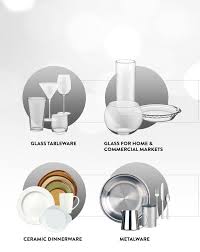 03 June 2019
On May 29, 2019, the European Commission (EC) published a roadmap outlining an initiative to lower migration limits for heavy metals in ceramic, glass, and enameled food contact materials (FCMs). The policy options proposed in the roadmap include the establishment of “appropriate protective migration limits for lead, cadmium and possibly other heavy metals, in ceramic and vitreous food contact materials. Where no protective migration limits could be set, the possibility of bans on certain metals for certain uses will also be considered.” However with the intent “to mitigate the possible negative impacts for manufacturers,” the document also mentions the option to “potentially include derogations for traditional and artisanal production; measures aimed at facilitating quality control throughout the supply chain, including labelling, documentation, quality control, manufacturing instructions, and resulting testing exemptions; longer transition periods in case of specific needs requiring major investments.”

EU Directive 84/500/EEC has been in force since 1984 and sets limits for lead and cadmium migration from ceramics. In the roadmap, the EC cites recent studies from the European Food Safety Authority (EFSA) from 2009 and 2010 containing “new scientific advice on the health effects of lead and cadmium in food” and explaining that some EU Member States have “noted that the existing migration limits. . . would not provide a sufficient protection of exposure for consumers” and requested the EC to lower these existing limits. The glass and enamel industry are reported to have also “pointed at the need to establish similar legislation for [their] materials, as their products would in practice already be regulated based on the limits set out in the Directive [84/500/EC].”

The roadmap itself is currently open for public feedback until June 26, 2019. A full consultation is planned for the second quarter of 2019 and will involve a 12 week open public consultation available on the EC’s central public consultations page and through the FCM consultation page. Targeted questions will also be sent to EU Member State representatives and specific stakeholder groups.